Today, the candler blog is proud to introduce a new column, Candle Whacks. The purpose of these essays will be to entertain as well as gain a little perspective on current views of media. We hope you enjoy this first installment and would love to hear any ideas you may have future Candle Whacks. Guest contributors are always welcome, just pitch an idea. 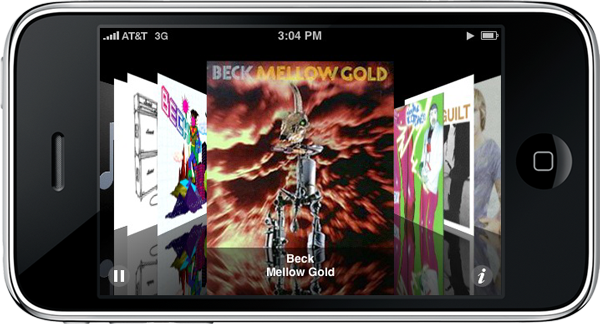 Artists whose name begins with the letter “B” represent nearly a quarter of the music loaded on my iPod, which holds a mere sixteen gigabytes of music as it is stuffed inside of my telephone. If Robert Leland’s Cryptographical Mathematics is to be trusted, B is merely the 19th most popular letter in the English language. While the king of them all, appearing in over 12% of all words, “E”, takes up less than 3% of my trusted music player. Second place “T” is even less, just 19 songs. Even the popular “R” is only about a tenth of my mobile collection.

There is no science to this whatsoever. Letter frequency is measured across words, not just the first letter of names. Still, are my tastes actually geared specifically to the letter B? Am I attracted to its curves; the way it takes two sensuous strokes to form the left-most vertical line and its intersecting bulbs? Perhaps, but I neither speak nor write in a particularly “B” heavy manner. “ Bravo, bitches. Best bargain bins in Binghamton.” I might say. “ Ban burger barns and bawdy balers in the bible belt.” I might protest.

The answer is much less interesting then any leftist lexical leaning or lustful letter love interest. I’m just lazy. As the owner of a sensible 45 gigabytes of digital music (B represents 16% of my total library) I have been forced to pare down my collection in order to fit them onto my iPhone.

Initially, I was committed to being even handed with all of my music. If I could not have it all with me all the time, at least I could have a decent cross-section. Jazz, Rock, Pop, Instrumentals, Hip Hop, maybe a smattering of movie scores; they would all make it onto my phone in equal proportions.

Genre tagging has never been my forte, so music is always organized alphabetically, by artist and then by album. So it is a proverbial scalpel that I must take to my music in order to gerrymander it onto my device with care and exactitude. Perform a RollingStones-ectomy over here, while removing a malignant TomWaits-tumor over there. Precision is vital in the process.

This is how it works in my dreams. Give the alphabetic nature of my collection, instead I just wander down the list from A to Z, slowly gathering the music I need most. The first time I did this, I hit sixteen gigs by about F. Cat Stevens and Chicago were simply taking up too much space. So I nixed some songs and trudged on. Not enough room for all of my Kinks albums. I could live with only half of my Miles Davis, but must I compromise on my albums by The Roots? By the time I made it all the way down to The Zombies, I had been put through hell, killing off my my favorite babies left and right.

However, the B’s, thanks in part to those artists listed above, remain unscathed. They get to stay because they planted a flag first. My eldest children offered the birthright of stagnancy. For as long as I have had an iPhone (I have gone through seven of them, don’t ask), the B’s have always been there, taking up the the bulk of my NAND flash memory.

I can’t help but think this is a sign of things to come. Last summer, I slowly began digitizing my DVD collection, mostly for viewing on my iPhone. We know that eventually, there will be enough storage on our mobile devices to accommodate whole film collections. Perhaps they will one day supplant music as the dominant media type on these devices.

When that happens, will I run into the same problem? Buffy the Vampire Slayer, Batman and Beauty and the Beast will be my films of choice. Will I wander the streets of Manhattan wearing video goggles, quoting The Big Sleep or Black Narcissus. “One point twenty-one gigawatts!” I might proffer a tourist waiting for a light to change in Times Square, who in turn will go home with a negative view of her trip east.

Or perhaps Bergman, Burton and Beatty will be the heavy hitters. “One of us, one of us.” I imagine I may chant this while standing at a urinal at Citi Field, taking in some of Tod Browning’s Freaks during a quick seventh inning pee, my next-piss neighbor thankful for the splash guard blocking his view.

Of course, I can’t honestly predict the future. For now, I will have to live with my B heavy music. “Venus as a Boy” will follow a listening of “Shake your Rump”. “One Down” and “Three Little Birds” will be next.

There was a time, not so long ago, when I would choose my media based on taste or mood.

Not anymore. Until I get this mess figured out, alphabetical frequency and name popularity will determine my listening patterns. I’m okay with that.

Now leave me be, I’ve must listen to Revolver again.