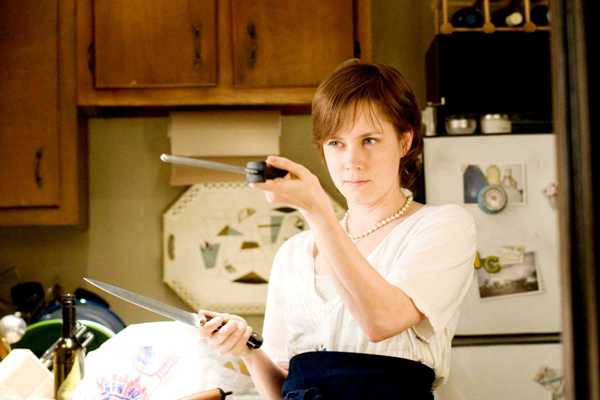 A cooking, blogging biopic is about the least interesting way I could imagine spending a muggy summer afternoon. And yet, there I found myself, utterly mystified by Nora Ephron’s Julie & Julia, the story of two women who are seemingly redeemed through the power of food alchemy. Featuring the second delightful pairing of Meryl Streep and Stanley Tucci, the film is a phenomenal take on the art of writing. In terms of scope, Ms. Ephron has pulled off a monumental feet by taking the most boring thing in the world, sitting down and putting pen to paper, mouse to blog, and pulling together a solid narrative with thought-provoking implications.

Let’s start with those memorable performances. Mr. Tucci has long been regarded as one of the finest (and fewest) character actors working today. Consistently winning over our hearts with whatever minutes of screen-time he can steal, the secret to his success is his embrace of being a bridesmaid, never a bride. Here, he plays Paul Child the, loving, caring, pencil-thin mustachioed husband to the as-yet famous Julia Child. That role is filled in by Ms. Streep who crackles with energy. Long regarded as one of the finest leading ladies in the biz, another dying breed, the actress seems to wish to be demoted to the status Mr. Tucci enjoys. Her character work is ultimately superb, in many ways out-sizing her front-and-center roles. Though she is technically a lead here, I would argue that she is filling out a supporting role with incredible finesse; Mrs. Child is ultimately a MacGuffin for the modern blogger Julie Powell’s personal redemption.

We find our weathered hero, the aforementioned blogger who is played by Amy Adams, making the move from Brooklyn to Queens in a city brought to it’s knees after te attacks of September 11, 2001. Julie, a onetime proud member of the Cobb salad eating literati, now finds herself answerig calls for the buerecratic organization charged with rebuilding Lower Manhattan. Day in and day out, she sits in er cubicle listening to the numerous sob stories that befell New Yorkers in the wake of the attack. Food is her stress reliever. She decries the mere fact that brownie batter will thicken every time she makes it is a relief in a world where nothing is certain. The process, not the result, is her redemption.

Enjoying the finer points of cooking isn’t quite enough for Julie, however. She needs to break back into that crowd she once enjoyed membership in; she needs to show up her skanky, yes skanky, blogging friend. And so an idea is formed, obviously, to cook her way through Julia Child’s “Mastering the Art of French Cooking” over the course of a year, blogging all the way. Meanwhile, in the 1950s, Julia is struggling to find purpose in France where her husband is employed and she is bored. Her search for meaning turns into the cook book in question. And the wheel goes round!

As a blogger, I can attest to the film’s accuracies in the blogging space (cyberspace, information superhighway for you real codgers out there). It’s all there folks: the “me, me, me” problem, the wonder that is a good comments system, the fear your boss will catch you in a lie, and most importantly the unnatural connection between reader and writer. It can be very difficult to put one’s finger on exactly what compels the daily blogger to stick to a game that earns them zero cash. The film hits the nail on the head in this respect. There is even a nod to the fact that the blogger’s printed counterpart, the printed columnist, still wields a mighty sword (at least she did in 2002).

Where the film enters into some deliciously brainy noodling is in the parallels between the times in which our title characters live. Both women live in cities trying to put themselves back together after the ravages of war. Both are afraid of Republicans. This has more to do, I assume, with Ms. Ephron’s political leaning than anything else. For the Childs, the mighty hand of the Republican comes crashing down in the form of Senator Joe McCarthy. For Julie, there is a single line (“a Republican would fire you”) that shows us her lefty-lean. I believe Ms. Ephron assumes her audience will see the jab at President Bush and the Patriot Act, but this may fall flat in places other than liberal hotbeds like New York. Nonetheless, the political subtext is rampant in the film, though it hardly beats you over the head. Only eggs get beaten in Julie & Julia. (chortle)

Finally, the film is about the power that our imagination has to get us out of even the most interminable of ruts. Late in the film, we learn that the “real” Julia Child has learned of Julie’s blog and hates it. This rattles our perception of the woman who gallivants about pretty ol’ Paris with a smile as big as her sizable frame; of course it rattles Julie’s as well. As she comes to terms with being hated by the hero who essentially handed her a career, Julie realizes that the Julia in her mind is more important than the real one; we reach the same conclusion. Julia and Paul Child as they appear in this film are a myth. I don’t care if they are accurate to a T, the truth is that we need legends, sometimes more than a real hero. I could go on and make the case for the mythos that enveloped the nation in the months after the 9/11 attacks, when the film takes place, but that is a completely different post.

As you may be able to tell from this near-thousand word post, Julie & Julia is a multi-faceted piece that has something for everyone. It is important to note that this is far from a chick flick, and there is no rom-com aspect to the film. Julie never gets her hair did to overcome loss; instead she is a liberated woman who expresses her independence in the kitchen, feeding her man.