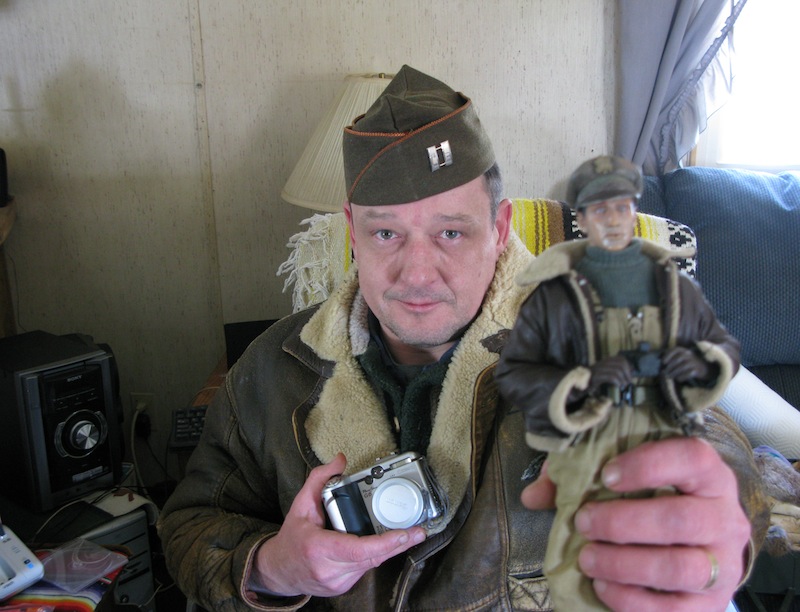 Okay, I’ll tell you a few things about it since you asked so nicely. The film follows Mark Hogancamp, a man who starts his life over after being beaten half to death. Once he can walk and talk and read again, he begins to learn a few things about his former life, of which he remembers nothing. He was a drunk; a drunk who kept detailed and often horrific journals of his darkest moments. As he slowly tries to put his life together, the pain of dealing with his attack and coming to terms with his former self, he begins practicing his own kind of unconventional therapy.

Mark has built a 1/6th scale WWII Belgian town he calls Marwecol. It is populated with dolls who all have a real world doppelganger, people close to Mark in his everyday, full-scale life. He dresses the characters up, creates plots for them to carry out, and photographs their goings on. The level of authenticity Mark keeps the world running at is astounding. The guns soldiers carry have moving parts. He wheels around a truck full of character so that the truck doesn’t look like it just came out of the box. He wants everything to be as real as possible in Marwencol.

There is more to Mark’s story, a lot more. Director Jeff Malmberg had great access to all things Hogancamp, including his family, his coworkers, and of course the town itself. Narratively, the film progresses in a manner that keeps things interesting. Mark’s former selkf, and current one, has a lot of skeletons in his closet which slowly come out as the film goes on. I would have wanted more from the cinematography of the film, however. I realize it’s a documentary and the character profile here is of the utmost importance, but when you are focusing in on a 1/6th scale world it would be great to have some nicer macro photography. Perhaps I’m spoiled or asking the world, but given how beautifully twisted the town of Marwencol can become, I would love to have seen it more vividly. Like I said, the character here is key, and boy oh boy what a fascinating story Mark Hogancamp has. This is definitely one worth seeing.

You can learn more about Marwencol at the film’s Official Website. There is one more SXSW Screening on Friday March 19th, 1:15 at the Alamo Ritz.