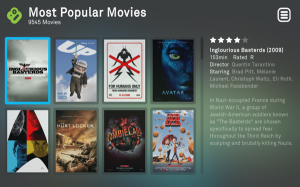 When Avner Ronen took the stage at Irving Plaza last night, he was met with whoops and hollers, requests to break into dance (to which he eventually acquiesced) and the clanking of PBR tall boys. He is not your average CEO. The setting for the launch of the aptly named Boxee Box, was perfect for a company as scrappy and ideologically cocksure as Boxee.

In a mere three years, the Tel Aviv and New York based startup has batted down nearly every one of its software competitors only to enter a hardware arms race against Apple and Google. Ronen has become something of a web video evangelist, famously sparring online with mogul Mark Cuban over the future of television. Now, he’s taking his company from the original free, hackable app that turns any computer into a net-centric media player with a slick interface, to store shelves in time for the holiday season. The product of a partnership with D-Link, the Boxee Box is here and the software is finally out of beta.

But what’s the big deal?

The Boxee Box brings what was once a very nerdy experience to the masses. Installing Boxee may never have been that hard, but hooking your computer up to your television, along with the audio, and figuring out how to control it from your couch was where the less tech-savvy stumbled. Now, it’s as easy as plugging in the box.

What sets the Boxee Box apart from its competitors is its ability to playback non-streaming media in almost every single format imaginable. As Ronen quipped, “If it has 3 letters in its name, we can play it.” With two USB ports on the back, users can attach massive storage for all of their videos and music. He played a 1080p x264 video off of an SD Card and it looked beautiful. Details are a bit thin right now, but Ronen did mention from the stage that users will be able to share that storage with other computers via Wifi.

Then there are the big partners, Netflix and Hulu. These announcements Avner coyly saved for the end of his presentation. Netflix, who has been a longtime partner with Boxee, will be coming later this year to the Boxee Box with a completely revamped interface and HD streaming. It appears that right now, users with a Boxee Box can still access the old Netflix app, but not in HD, yet. Hulu, who has a contentious history with Boxee, is bringing their paid Hulu Plus service sometime early next year.  “It’s true, we’re friends now,” Avner fawned, “Next up, Middle East Peace.”

All of that aside, and it’s a lot to set aside, the most interesting part about this product launch has nothing to do with their partners or their content on day one, but with their pragmatic view of web video and how it fits into the living room. The Boxee Box now has a brand new Webkit browser built in conjunction with Intel (who provides the system- on-a-chip inside). If you want, you can view an entire webpage with video playing on it, using the remote’s directional-pad to push a mouse pointer across the screen to get what you need. The thing is, Avner sounded downright sour that a browser is accessible through the Boxee Box. “It works, it’s not pretty, but it’s there if you need it.”

That’s not all he had to say. “Browser on a TV kind of sucks.” This sounds like a direct shot at GoogleTV, whose demo showed off how much browser they could fit onto a television. So if the browser concept sucks, what about apps? “Idea of apps kind of sucks.” It’s not that apps on your TV is a bad idea (especially since Boxee basically relies on them), it’s that there are too many APIs and Development Kits and platforms out there already; Boxee doesn’t want to become another language for developers to learn. 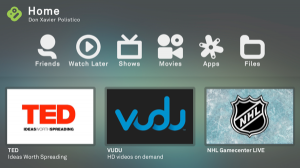 The workaround? HTML5. Ronen explained that developers can build some really cool HTML5 video apps which the Boxee Box will be able to access. He demoed a New York Times app that looked great; no one would ever question its code provenance. Given that HTML is an open standard, this makes it easier for developers to get in line. GoogleTV supports HTML5 apps as well, so it will be easier for content creators and channels to develop once and deploy to both platforms. The AppleTV does not do this, but Avner said he hopes they’ll start soon so that content creators can be on any television.

The Boxee Box is a very nice offering for consumers, and it is priced competitively to move a lot of units this holiday season. At $199 it’s twice the price of an AppleTV and $100 less than the Logitech Revue, GoogleTV’s flagship device. The thing it, it does (at least) twice as much as the Apple TV and probably more than the Logitech Revue. For content creators, this means yet another barrier has been broken down. To get your content onto Boxee is only slightly more difficult than getting a podcast into iTunes. The more homes with a Boxee Box, the more eyeballs for content creators to reach.

I didn’t get the chance to actually use a Boxee Box (though I’m told I’ll have the opportunity soon) so I can’t speak to its actual quality. I’ve been using the software since it was in alpha, and if you told me three years down the line they’d be in retail stores up against Apple and Google, I would have said you were nuts. Yet here we are. It could very well be a flop. However, if you’re a content creator looking for a new way to reach audiences, there has never been a better time to get your media into the homes of the masses. Whatever poison you pick, the Boxee Box appears to be another great option in a year that looks poised to be a hallmark one for streaming video.