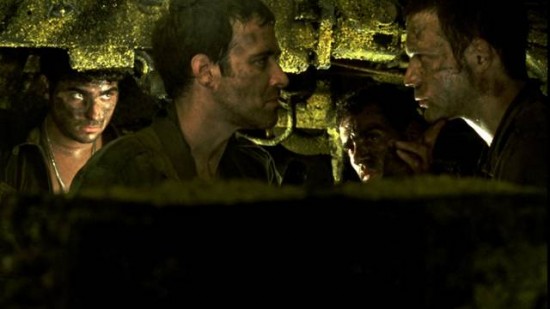 Middle Eastern politics are as tenuous as ever. While filmmakers, artists, politicos and celebrities became entrenched in a controversy over the Toronto International Film Festival’s decision to feature films from Tel Aviv this year, a very interesting thing happened halfway around the world. As voices pointed towards our neighbors to the north expressed beliefs for or against Israeli cinema, the jury at the Venice Film Festival gave their top honor, the Golden Lion, to Samuel Maoz’s Lebanon, a film which chronicles the 1982 Lebanon War from the vantage point of a tank gunner. We can learn a lot from not only a film like this, but the story that surrounds it given the timing of its release.

Lebanon opens and closes in a field, but that is the only time you will be outside of an Israeli tank for the entire runtime of the film. Mr. Maoz, who shares a nickname with the film’s most relatable character, Shmulik, wants to bring us to the emotional realities of a war he experienced through the sight scope. It is a bold move and the concept comes off incredibly smooth. The story keeps moving forward, even though we do not. At the NYFF screening, cinematographer Giora Bejach quipped that they kept the setting minimal for budgetary reasons. While this may be true, it’s much nicer to think there was a bit more intentionality behind the cramped landscape.

As far as war films go, Lebanon is okay. It is a valiant first effort for Mr. Maoz, who is new to feature filmmaking. The film’s biggest flaw is an inability to recognize when the audience has gotten the point well enough. Through some disturbing imagery, we are brought into the real horrors of war. A disrobed woman searching for her daughter, a disemboweled mule crying on the side of the road, an elderly truck driver veritably quartered by the blast of a tank shell. We linger on these sights through the cross-hairs for about twice as long as we need to emotionally. It reaches the point of manipulation, which doesn’t give the audience enough intellectual credit. That would be my sole, albeit weighty, complaint about this film.

The most phenomenal aspect of the film is the creative camerawork within (and technically without) the tank. The most novel device is using the armored vehicle’s spotting scope as a point-of-view eye on the action. Whenever Shmulik looks out onto what is happening, we see a crosshairs on screen. This is jarring in the kind of way that makes me feel all warm inside. The camera is now a weapon. As an audience, we must find a way to cope with the actions of the camera; cope with our actions. Like I said before, we linger for too long on the most emotionally wrenching scenes, but if there’s a point to that, it is to point out our complicity with the aberration of war.

Sitting within the belly of the steel beast are four soldiers, each predictably more fascinating than the next. There is a man-child, a sensitive type, a class clown, and a confused commander. Together, they navigate their range of emotions as the war presses on. It is a nice balance, again proof of Mr. Maoz’s phenomenal entrance into feature films. With time, he will be able to refine this square character relationship in a way that brings out a more surprising story. While it may be predictable, it is a real treat to see.

This is the internal struggle of the Israeli soldier. While he must fight to survive, how can he survive given what he has done. As Mr. Maoz mentioned after the screening, perhaps the two-plus decades that have passed since this war have given his generation the strength to tackle the most difficult questions a people can have about themselves. He noted this after the flurry of recent internationally recognized Israeli films on the topic, particularly Ari Folman’s Waltz with Bashir.

What is so odd about the spat that erupted in Toronto over the Tel Aviv films is that Lebanon is exactly the kind of film that Israel’s detractors would want to see. It is critical of government policy, questioning of the nation’s military strength, and speaks to the biggest causes of those who would like to keep Israel in check. This isn’t to say it is “anti-Israel” by any means, simply intellectually diverse; a conversation starter, if you will. And, like many films outside of the U.S., it was made with government funding. I bring all this up to point out the wide swatch of gray that exists between the black and white of Middle East arguments. Lebanon, while it may not be the best Israeli/war film, certainly represents an interesting progression in an ever changing cinema.